Shear connectors on the top flanges of the steel girders provide the means to achieve composite action between the slab and the girders, thus increasing both stiffness and strength. This article reviews the behaviour of the connectors and the design rules for the shear connection in BS EN 1994-2[1]. Further guidance is given in Section 6.5 of SCI P356 and examples of the calculation of shear resistance are given in SCI P357.

The shear flow between steel beam and reinforced concrete deck slab is a natural consequence of the requirement for composite action. If there were no connection, a beam and slab would bend as illustrated diagrammatically below. The presence of a shear connection prevents the slip between the two components and achieves a much stiffer and stronger beam.

When there is shear connection, the two components behave as one.

According to elastic theory of bending, the stresses and strains in a beam in bending vary linearly from the extreme tension fibre to the extreme compression fibre and the shear flow at any level (relative to the neutral axis) in the cross section is given by:

For both A and I, the area of concrete should be taken as its transformed area, i.e. its actual area divided by the modular ratio. When evaluating shear for hogging moment regions, the slab should be considered to be un-cracked. (This is a conservative simplification and is applicable except when tension stiffening and over-strength concrete are explicitly considered, although there is no guidance in BS EN 1994-2[1] for evaluation in those situations.)

In practice, the magnitude of the shear flow varies along the beam and the required resistance could be provided to match that variation exactly but it is much easier to provide a uniform resistance over the whole beam, or more economically, over a few lengths of uniform provision.

Where the resistance of beams is based on the plastic resistance of the cross sections, the above expressions for shear flow are not valid as the material behaviour is non-linear and shear flows cannot be calculated from linear elastic analysis. BS EN 1994-2[1] clause 6.6.2.2 (1) covers this case for Class 1 and 2 members.

BS EN 1994-2[1] Clause 6.6.2.2 (2) gives specific cases of a concrete slab in compression. The longitudinal shear flow has to be determined by considering the change in the force in the slab over the length where the bending moment exceeds the elastic resistance. Clause 6.6.2.2 (3) covers slabs in tension and clause 6.6.2.2 (4) allows gives an alternative approach where the elastic section analysis is used based on the uncracked cross section properties. The slightly unconservative neglect of inelasticity in this case is offset by the conservative assumption that the section is uncracked.

As mentioned above, the most common form of provision for shear connection is the headed stud, welded to the top flange. Studs are generally placed in rows, the spacing (and thus the number per unit length) being dependent on the design shear force between girder and slab. 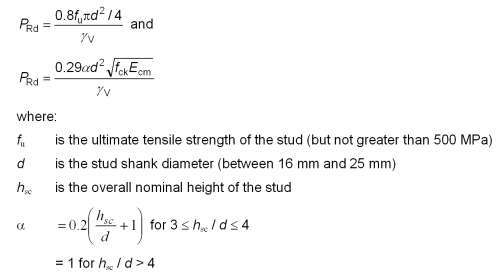 Limits are given on the spacing of studs - see further discussion below.

It can thus be seen that for most composite bridges, where the concrete grade is greater than C25/30, the strength of the connection is determined by the stud itself.

Slabs tend to ‘ride up’ the weld collar, so a minimum tensile resistance of 10% of shear resistance is required by BS EN 1994-2[1] – this is deemed to be provided by headed studs. Tensile design forces less than this may be ignored.

For greater tensile design force, no interaction relationship between tension and shear resistance is given but it is suggested in Hendy and Johnson[3] that the following criterion may be used:

The fatigue resistance of shear connectors must also be considered

BS EN 1994-2[1] does not provide rules for any other type of shear connector, although principles are given for determining the resistance of other types of connection. The intention was not to preclude alternative forms but to stimulate innovation. If alternative forms of shear connector are considered (for example, where a higher shear resistance per connector is needed, such as in some connections at integral abutments), the following guidance is given in BS EN 1994-2[1]:

Hendy and Johnson[3] give a derivation of the resistance of block and hoop connectors, which is a common alternative form of connector. The design of this type of connector is based on the following premise:

Rules are given in BS EN 1994-2[1] on the positioning of studs and their height relative to transverse reinforcement.

To avoid the creation of potential shear failure planes that pass over the shear connectors and under the transverse reinforcement, the connector spacing and height of bottom reinforcement are limited in BS EN 1994-2[1] clause 6.6.5 . Tests have found that the longitudinal failure surfaces are not always planar. A longitudinal section through a possible failure surface is shown. The dimensions shown are drawn to the limits in BS EN 1994-2[1]. The example shows that α is about 8°. Hendy and Johnson[3] view this as too flat to prevent failure and recommend a minimum value of 17°. This would give a maximum spacing of 450mm with 50mm bottom cover and a 125mm tall shear stud (length after welding being 120mm typically).

BS EN 1994-2[1] Clause 6.6.5.5(4) gives rules that to allow connectors to be grouped in pockets (useful when full-depth precast units are used), but then states that the following need to be verified:

BS EN 1994-2[1] clause 6.6.5.6 gives the edge distance to the shear studs as not less than 25mm. However, where permanent formwork is used, allowance needs to be made for seating the formwork on the girder in accordance with the manufacturer’s requirements. Additionally, protective coating should be returned by at least 25mm from the edge of the flange or, where permanent formwork is used, 25mm from the edge of the formwork (see Soubry[7]). Usually 100mm edge distance is sufficient.

[top]Longitudinal shear resistance of the slab

To verify the adequacy of the slab for the forces transferred by the shear connectors, several potential failure surfaces need to be considered. Two shear surfaces are illustrated right.

BS EN 1994-2[1] clause 6.6.2 defines the design longitudinal shear per unit length VL,Ed between steel and concrete as the rate of change of force in either the steel or concrete element. In the BS EN 1992-1-1[4] truss model for the shear between the slab and beam, requirements are given in relation to the design shear stress VEd. There is some inconsistency between BS EN 1992-1-1[4] and BS EN 1994-2[1] when expressing shear stress but for shear surfaces type A-A it should be considered as the design shear per unit length on one side divided by hf, where hf is the depth of the slab and for shear surfaces type B-B it is the total design shear divided by hf, where hf is the length of the shear plane.

The area of transverse reinforcement Asf at spacing sf that crosses the shear surface is required by BS EN 1992-1-1[4], expression (6.21) to satisfy:

Additionally, the longitudinal shear stress should satisfy BS EN 1992-1-1[4] expression (6.22) in order to prevent crushing of the compression struts in the flange.

For consideration of the interaction with transverse bending moment:

For consideration of the interaction with tension: